Highway 78 Scotch Ale is named after Highway 78 which more or less runs from Stone Brewing Co. in Escondido past Green Flash in Vista and ends near Pizza Port in Carlsbad. This 8.8% ABV beer is stronger than many of the Scotch ales I’ve had in the past which I think helped balance it out.

It pours a very dark red with almost no head (with a careful, but not too slow of a pour). The smell seems a bit muted, I don’t get much out of it, although it is a bit sweet, think toffee or caramel. The taste is sweet and smoky, a bit of toffee and breadiness with quite a bit of smoke. The high alcohol is also apparent, but helps balance out the sweetness. One of the things I often don’t like about Scotch Ales is the cloying sweetness that can often make them hard to drink. This isn’t the case with Highway 78.

Unlike most beers Stone puts out, hop bitterness is almost nonexistent. They used East Kent Goldings and Target hops, which they say “provide a very modest backbone of peppery hops”. There was a very slight bitterness to the finish, but nothing about this beer would I describe as hoppy in the least. 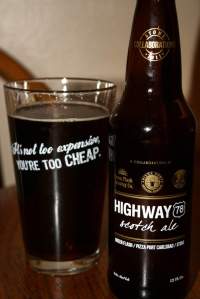 Highway 78 Scotch Ale was released February 14th, 2011 and should be available in most market’s Stone is in. Here in San Diego it’s on the shelves at most better bottle shops and on draft at some bars and restaurants. I picked up this 12oz bottle for $2.99 at Palm Springs Liquor in La Mesa. Stone collaborations tend to be available for a while at many liquor stores, this is certainly a beer I’ll drink again. I’ll also be on the lookout for more higher ABV Scotch ales to try.