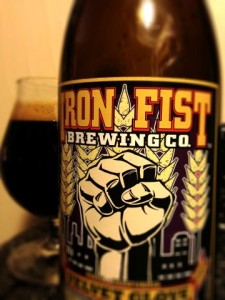 Velvet Glove is probably my favorite beer in Iron Fist’s small but growing lineup. It’s a 9% Imperial Stout that differentiates itself fairly well from the competition.

It smells just like you’d expect: roasty, reminiscent of dark chocolate, vanilla with a bit of strong booziness in there as well. But it’s the taste that sets it apart. I’m a big fan of Imperial Stouts, and I often pick up on the roasted flavors, which typically reminds me of coffee. But Velvet Glove doesn’t have that so much.

There’s a bit of roast in there, but it reminds me much more of good dark chocolate, maybe with just a bit of creamy espresso. It’s a touch on the sweet side, which also helps cause me to associate it with chocolate. There was a bit of fruitiness here, think dark pitted fruits, like a date.

The carbonation was spot on but the mouthfeel felt a little weak. It was thin, not really watery, but not what I expected from a beer with velvet in the name. Not a huge complaint, but I’d prefer a bit more body there.

Overall a nice beer. It’s certainly not the best Imperial Stout being made in San Diego, but it holds it’s own pretty well.