societe brewing co. grand opening, The Apprentice, The Dandy, The Harlot, The Pupil, The Widow 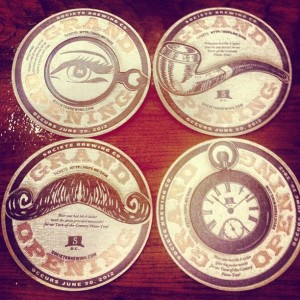 When Societe Brewing Co. opened last month with two beers on tap, The Harlot, a Belgian Pale Ale and The Apprentice, a Strong IPA they called it their soft opening. Since then they’re released a few more beers in their tasting room and kegs have started to get around town. At the end of the month, Saturday June 30th to be exact, they’ll be celebrating their Grand Opening at their Kearney Mesa brewery.

There will be two sessions of 150 people each. Tickets went on sale yesterday and the first session is already sold out. The $5 tickets include entry (no entry without a ticket, no tickets sold the day of) and your first beer. Subsequent beers will be available for purchase. There will be six beers on tap for the Grand Opening, three IPAs, two Belgians and one San Diego Gold. That last style has me curious.

I’ve had tastes of both The Harlot and The Apprentice, both of them are quality beers that I look forward to enjoying more of soon. Since they first opened Societe has released three more beers, The Pupil, a Citra and Nelson hopped IPA that I’ve heard many people compare to an Alpine IPA (let’s face it, Alpine is the gold standard when it comes to clean hop forward IPAs), The Widow, a Belgian Strong Ale and the so-new-I-haven’t-heard-anything-about-it (other than that it’s a 6.4% “San Diego IPA”) The Dandy.

With how fast tickets to the first session sold out I wouldn’t wait to buy tickets for the second session if you’re interested in going. Societe has said on Twitter that they may add a third session on another day if there is enough demand and the two Saturday sessions sell out.