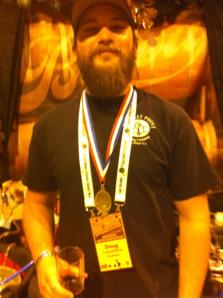 Last week Travis Smith left The La Jolla Brew House after only a few months on the job and announced that he would be starting a new brewery in San Diego with a partner that was currently anonymous.

Thanks to a commenter’s tip I’ve confirmed that Smith’s partner in Societe Brewing Co. is Doug Constantiner, who currently brews at The Bruery.

Look for more about Constantiner, Smith and Societe Brewing Company in the February issue of West Coaster.

Yesterday I mentioned that Travis Smith has left La Jolla Brew House just a few months after he began brewing there with plans to open a new production brewery in San Diego with an as-of-now anonymous, but experienced brewer, partner. There’s been quite a bit of chatter about Smith, La Jolla Brew House and Societe Brewing Co. In addition to the blog post I put up yesterday, Brewery Rowe and Brookston Beer Bulletin both blogged about Smith.

According to Smith, Societe is actively looking for equipment and space with hopes to start construction this summer and to be brewing in 2012.  Smith tells Brookston Beer Bulletin that they have the money to start, and are working on raising more capital. Smith tells me they’ll be brewing “sour beers and IPAs, but no sour IPAs.”

Smith knows a thing or two about both sour beers and IPAs, not only was Pariah IPA, one of the first beers he brewed at La Jolla Brew House fantastic, he has also spent time brewing at both Russian River Brewing Co. and The Bruery.

While Societe Brewing Company is still a long ways out, the prospect of another brewery in San Diego is promising.

Think you know who Smith’s currently anonymous partner in Societe Brewing Company is? Leave a comment below.

Posts were slow here over the past few weeks, it’s not that nothing happened in the world of craft beer, I just got busy with Christmas, New Year’s and everything else that comes along around this time of year. Below are a few tidbits and little beer related news items that did happen recently.

Got an event coming up you would like to see listed? Email us at events@sandiegobeerblog.com

Craft Beer with the Expert – Park2Park Shuttle will pick you up at one of their designated stops and take you to Blind Lady Ale House for a guided beer tasting with Blind Lady co-owner and Automatic Brewing Co. brewer Lee Chase. Pizza will be served and then it’s back on the bus to Home Brews and Gardens for a homebrew demonstration.

The O’Brien’s Pub Wet Hop Festival has been going on all weekend and Tom Nickel of O’Brien’s expects most if not all of the kegged beers to still be on tap when they open Sunday morning. Throughout the weekend they’ll have over 15 different wet hopped beers on tap.

We couldn’t find any notable beer events, but that doesn’t mean there aren’t any happening. If you know of anything going on, email us at events@sandiegobeerblog.com

The Ballast Point Brewing Company 14th Anniversary party this past Saturday was a big hit. Held at Liberty Station in Point Loma and only $20 for 10 tasters it was quite the deal. Ballast Point had at least 40 beers on tap and there were plenty of guest breweries on hand as well. The festival was pretty full but not overly crowded and the only real complaint I heard all day was the lack of water. There were no water stations as far as I could tell and not even any drinking fountains inside the festival. (Sure, some people were complaining about the lines for the bathrooms, but it’s a beer festival, a bathroom line should be expected).

Below are some notes on the beers we tasted as well as a few pictures from the event.

Mike and Ryan from West Coaster were on hand volunteering, click on their names to read each of their takes on the festival, pouring two of the most popular casks there.

END_OF_DOCUMENT_TOKEN_TO_BE_REPLACED

This time next week La Jolla Brew House will be celebrating their 7 year anniversary. They’ll be hosting a beer dinner and have paired up with Ballast Point Brewing Co. to pair four courses with their own house beers and those from Ballast Point.

This all happens Wednesday, May 26th at 7pm. The four course meal is $30 + tax and gratuity. Reservations are necessary, email: claudette@beachhousebrew.com 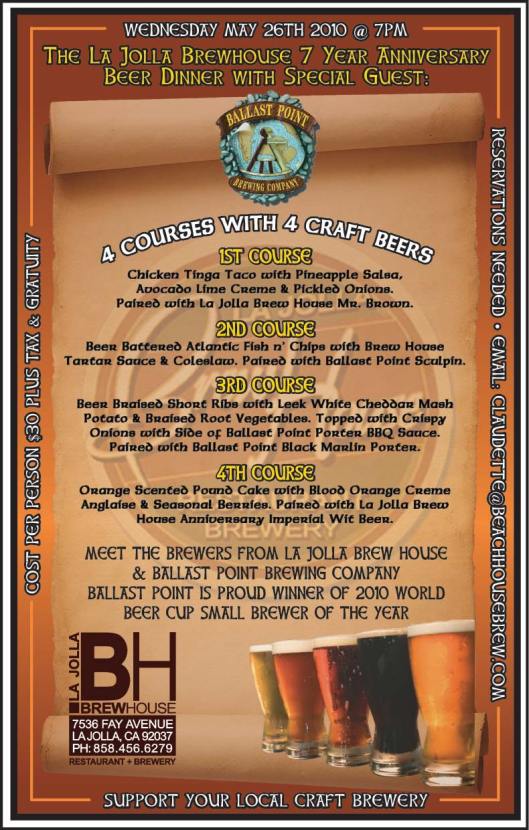