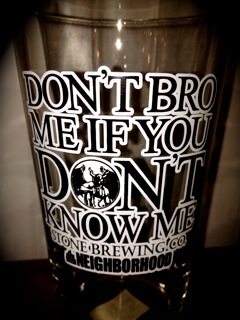 3/10/12 See update with info from Arsalun Tafazoli at bottom of post.

I have no idea if this pint glass, adorned with the Neighborhood name and logo along with the Stone Brewing Co. name and gargoyle is a commentary by Neighborhood aimed at Sid Mikhail of Best Damn Beer Shop. If you know Sid you’ve probably been greeted by him with “Hey bro” at least once, it’s something he’s fairly well known for in the local beer community. I’ve had multiple people bring it up with me when talking about Best Damn Beer Shop. Granted some people don’t like it, some people find it a little odd, others just understand it’s the way the guy talks and don’t mind it (myself included).

Neighborhood recently had a fairly public dispute with Best Damn Beer Shop when they announced plans to open a tasting room and off-premise bottle shop near their current bar/restaurant at 8th and G St Downtown (which happens to be just a few blocks from Best Damn Beer Shop). You can read more about that here (and be sure to read the comments).

An email to Arsalun Tafazoli, owner of Neighborhood, asking about the glasses and if they are a commentary about Sid Mikhail was not returned. Neighborhood’s publicist who sent me the image of the glass and info about the night had this to say about it: “It’s just a Neighborhood saying that means just that. A quote from Arsalun I believe.”

I’m perfectly willing to admit that there’s a chance that this has nothing to do with Sid and Best Damn Beer Shop, if that is the case it is a most unfortunate coincidence. Previously Arsalun Tafazoli said his opening a bottle shop wasn’t about competition but rather about building community in craft beer. If that’s really what he’s after this certainly isn’t the way to do it. Arsalun is a smart guy, and pretty on top of things, it’s hard for me to imagine that even if it weren’t his intention he wouldn’t know that some people might see this as a comment about Sid at Best Damn Beer Shop given what’s gone on between the two businesses recently.

And just why is the glass co-branded with Stone Brewing Co.? The glasses will be given away Tuesday night (March 13th) with the purchase of any Stone Brewing Co. beer at Neighborhood, when they’ll also be releasing for the first time a new custom blend which they just got ABC and TTB approval for, Stone Mixed Tape-GK & LU’s Blend Vol. 1 will be on tap for the first time ever. It’s a blend of Stone Levitation Ale, Stone LeVariation Ale (Levitation w/ our Belgian yeast strain), Stone Sublimely Self-Righteous Ale, Stone Smoked Porter, Stone Cali-Belgique IPA, 2011 Stone Imperial Russian Stout and 2011 Stone BELGO Anise Imperial Russian Stout with added notes of sage, peppers, lemon thyme, and Citra hops.

In an email Greg Koch CEO of Stone Brewing Co. distanced the company from the glass and any potential bad blood between Neighborhood and Best Damn Beer Shop, “I’m not aware of the source of the “Bro” thing.  We were not part of the design process of the glass.  We are not part of any ‘spat,’ and I’m not aware that the glass is either.”

As for the beer I’ll say it sounds interesting — in both the I am really genuinely curious how that will taste sense of the word, as well as the way one might stretch out the first syllable when they say the word, innnnnteresting, to denote that they might have a few reservations about it. One way to find out how the blend works out is to try it, 6pm Tuesday at Neighborhood, Koch will be on hand to see how folks respond to it.

Update: Arsalun Tafazoli of Neighborhood wrote back to say this has nothing to do with Sid and Best Damn Beer Shop and that glasses were actually planned and made for a San Diego Beer Week event that had to be bumped due to scheduling conflicts. So it turns out that this is just a really unfortunate coincidence as I previously wrote could be the case. I asked around a bit before publishing this post yesterday and every one I talked to assumed this was aimed at Best Damn Beer Shop, so regardless of intention, I wasn’t the only person that interpreted it as such. Tafazoli’s email is below.