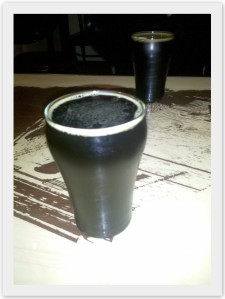 With plenty of bars pouring all sorts of special beers for San Diego Beer Week Preview Weekend it was  hard to decide where to go and what to drink last night. But I found myself at Toronado and Ritual Tavern, and certainly wasn’t disappointed.

Toronado was hosting a Firestone Walker showcase with seven Firestone brews on tap and one on cask including Parabola the much sought after Imperial Stout. On cask was 100% oak fermented, unfiltered DBA, which was the first beer I opted to try. While I certainly don’t have any complaints about DBA, I’m also not a huge fan of it. I enjoy it but it’s not one of my go to beers. The oak, unfiltered DBA on cask was good, and I’m glad I tried it, but I didn’t order a second pint. Instead I moved on to Firestone Walker’s Union Jack IPA, a beer which I had never tried before. With a name like Union Jack IPA I was expecting a British IPA, but was pleasantly surprised when I tasted it. It’s loaded with American hops, Warrior, Simcoe, Cascade, Centennial, Amarillo, Chinook to be exact, and had a nice citrus hop flavor and aroma. No wonder it won back to back gold medals at the GABF in 2007 and 2008. At 7.5% it’s on the fence between a standard American IPA and a Double/Imperial IPA. This is certainly a beer I’ll be drinking again.

I made my way down to Ritual Tavern to try the three year (two of those years barrel aged) blend of Alesmith Brewing Co.’s Speedway Stout. Speedway Stout is one of my favorite beers, so I had high expectations for this, and while it didn’t disappoint, I don’t think it lived up to all the hype I let build up in my head either. It felt a bit “warmer” than standard Speedway Stout. And I’m not exactly sure what I mean by the word “warmer”, it didn’t taste stronger alcohol-wise, but was a bit less sweet and the coffee didn’t come through at all. It smelled a bit like a port wine. Again a good beer I’m glad I tried, but for the price and taste I’ll stick with the standard Speedway Stout.

As for Saturday and Sunday check out some of the week long events.