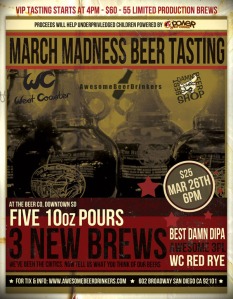 If you know of anything that isn’t on the events calendar, please email events@sandiegobeerblog.com to get it added.

Pizza Port Ocean Beach is doing a Pizza Port Keep the Glass night. They’ll have a tun of Pizza Port OB beers as well as a few favorites from the other PP locations. They’ll also have some treats from Lost Abbey as well including Red Poppy.

Live Wire might not be the first place you think of when you think craft beer, but some say they’re the original San Diego beer bar. They’re featuring a Firestone Walker showcase with four draft beers, including Firestone Walker 14th Anniversary as well as a cask of Union Jack IPA.

My friends over at West Coaster, Awesome Beer Drinkers and Best Damn Beer Shop have teamed up to host a charity beer tasting at The Beer Company downtown. They have an insane VIP bottle list lined up as well as a more standard regular session with a chance to try five beers from The Beer Company, including three never seen before.

Jean Van Roy, owner and brewer at Cantillon, producer of some of the world’s most sought after sour beers will be at Stone Brewing World Bistro and Gardens Sunday afternoon. They’ll have Classic Gueuze on draft and six other Cantillon beers available in bottles. All Cantillon beers will only be available at the outside bar in 4oz pours only.

The Handlery Hotel & Resort is hosting the Second Annual Mission Valley Craft Beer Festival, Suds for Surgeries to benefit Fresh Start Surgical Gifts. They’ll have unlimited tasters as well as food and live music, all for a good cause.

Another European brewer will be in town, this time it’s Iacopo Lenci from Italy’s Bruton Brewery. He’ll be at Hamilton’s Tavern with five of his beers.

I haven’t heard of anything special going on. If you know of something please email events@sandiegobeerblog.comto get it added.

There’s a lot going on for a Wednesday night, but BrewDog night at URGE Gastropub looks the most promising. They’ll have two different kegs of BrewDog’s Paradox Imperial Stout aged in different Scotch Whiskey barrels and have it on cask as well. They’ll have kegs of the 18.2% ABV Tokyo as well as the  BrewDog/Stone Brewing Co. collaboration Bashah. They’ll even send you home with your own BrewDog glass.