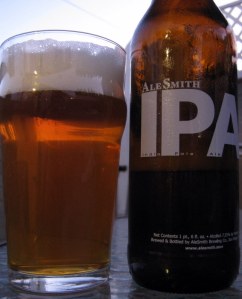 Until recently AleSmith IPA was bottle conditioned resulting in some sediment in the bottom of the bottle which could cause for a cloudy beer if not poured carefully. But AleSmith got a new bottling line this summer which allows them to force carbonate some of their bottled beers and results in a nice clean looking beer.

AleSmith IPA has a big hoppy smell and a taste to go along with it. There’s a lot of pine and citrus bitterness fairly well balanced by some slightly sweet caramel like malt and maybe just a bit of toastiness from the malt as well. In San Diego, the land of big hoppy IPAs this might be considered a balanced IPA, but that’s not too say that it isn’t hoppy.

At 7.25% ABV it’s a bit warm from the alcohol, constantly reminding you that it’s not a low ABV beer, but it’s still pretty easy drinking. It finishes dry with a bitter pine like hop finish.

This isn’t the hoppiest of West Coast IPAs, but it’s no slouch. No complaints here especially because it’s widely available and reasonably priced.

AleSmith doesn’t date their bottles so make sure to buy from a shop that has good turn over (I picked this bottle up for $5 at Bottlecraft and it was pretty fresh). The bottles still mention being bottle conditioned even if they’re from the new bottling line and were force carbonated, so don’t let that fool you into thinking you’re getting an old bottle. Just hold the bottle up to the light and look for sediment in the bottom, if it’s clear you can be fairly certain you’re getting a bottle from the new bottling line.

Pizza Port Carlsbad alone brought home six medals, tied for second place for most medals with Firestone Walker (Rock Bottom also took six medals, but all Rock Bottom locations were entered together, not separate for each location as Pizza Port was). Pizza Port Carlsbad also tied for second place with Firestone Walker for most gold medals won with three. Sun King Brewing in Indianapolis took home the most gold medals (four) as well as most medals overall with eight.

California breweries took home the most medals with 51 total while Colorado came was second with 44. The state of Oregon was third with fifteen medals. Think about that for a moment, San Diego breweries alone came home with five more medals than the entire state of Oregon and San Diego accounted for nearly 40% of California’s medals.

END_OF_DOCUMENT_TOKEN_TO_BE_REPLACED

In all San Diego County breweries took home 15 medals listed below. The full list of winners can be seen here.

The Great American Beer Festival is set to get under way in Denver tomorrow (September 16th). Beer geeks and industry folks from around the world travel to Denver for the event, including many from San Diego. But fret not if you’re stuck in San Diego this weekend with no travel plans for Denver, because even though the biggest beer event in the country is going on a few states away, there are still plenty of great beer to be drank right here in San Diego.