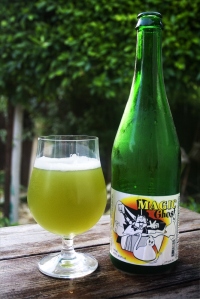 I’ll start out by saying that Fantôme Magic Ghost is one of the most unique looking beers I’ve ever seen, the picture here doesn’t do justice to just how spectacularly green this beer is. Magic Ghost is said to be made with green tea, but I didn’t pick up any flavors that I would attribute to the use of green tea. I’m also assuming the green color of the beer is from food coloring, I don’t know that for sure, but can’t think of anything that would make it so vibrantly green.

Magic Ghost is sweeter than most Saisons, but not overly sweet. The smell is reminiscent of a raspberry or strawberry cream soda with just a bit of musty Saison funk in there.

The first thing I noticed upon the first sip was the prickly mouthfeel due to the high carbonation. Just like the smell the taste is on the sweet side and one of the first things I taste is strawberries and cream. Magic Ghost is fairly citrusy as well, my mind wanders towards lime, but I can’t help but think that’s just due to the color of the beer. The same thing goes for the kiwi flavor I’m picking up. Does this beer really taste like kiwi or is that just a trick due to the green kiwi like color of the beer? There’s some candied-ginger and lemongrass flavors in there as well, with the lemongrass becoming more noticeable as it warms up.

Magic Ghost is slightly tart, but nowhere near sour. A bit of typical Saison funk, presumably from the yeast is present as well, but certainly doesn’t take front and center over all the other things going on with this beer.

Some people might call Magic Ghost a gimmick, but I call it a damn good (and unique looking beer). I picked this bottle up for $15 at Bottlecraft but according to their website they’ve since sold out. I know that Olive Tree Market and Best Damn Beer Shop got some in as well (and probably more shops around town as well). If you want to try this beer I’d say go out and get one sooner rather than later. And putting a couple of bottles away in a cool dark place until March 17th wouldn’t be a bad idea either.

UPDATE: Dr. Bill brought to my attention that this beer was made with woodruff syrup, which is what gives it the vibrant green color. I’m not sure if there is green tea in it or not, but woodruff does explain the color.