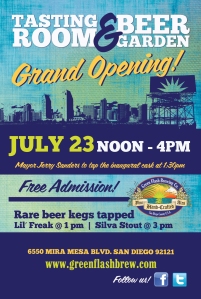 Green Flash Brewing Co. has been open in their new Mira Mesa location for a little over a month now, but tomorrow (Saturday, July 22nd, 2011) they’re holding their official grand opening from 12-4pm.

Mayor Jerry Sanders will be on hand to tap the inaugural cask at 1:30pm and in addition to their solid standard lineup they’ll have at least two special beers: Lil’ Freak gets tapped at 1pm and Silva Stout at 3pm.

Admission is free, you just have to buy your beers.

Green Flash is working with Brew Hop and a few local bars to provide complimentary buses to the event.

From what I’ve been told buses will leave from Churchill’s Pub in San Marcos at 11:10am, and 1:20pm with stops to pick more people up at Lumberyard Tavern in Encinitas 35 minutes later before heading on to Green Flash. Buses will also leave from Hamilton’s Tavern at 11:15am and 1pm, stopping at  Toronado at 11:45am and 1:30pm and O’Brien’s Pub at 12pm and 1:40pm before heading up to Green Flash. Buses are scheduled to depart Green Flash back to those bars every couple of hours up until about 4-5pm.

As always check with the individual bars to confirm times and for more info.