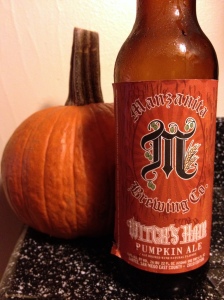 Last year, just a few short months into Manzanita Brewing Company’s existence they brewed a pumpkin beer. It wasn’t bottled and was sold only as growler fills and on draft in the tasting room (and a few select accounts). Last year Garry Pittman at Manzanita told me that the first keg they tapped was dry within 7 hours, I picked up a growler at the time and was impressed, in fact it might have been my favorite pumpkin beer out of all those I tasted last year. With all that in mind I jumped at the chance to try it again this year.

Now it’s called Witches Hair Pumpkin Ale and is being bottled in 22oz bottles for the first time this year but unfortunately I wasn’t nearly as impressed with it as I was last year and I’m left with a question: how old was the beer I drank? After I bought it I noticed in the small print on the label that it says “2010 Edition.” Unless that was a typo I’m left to believe that this beer is about a year old. Witches Hair is a fairly big beer, the label lists it at 8.8% ABV, and many higher alcohol beers will age ok for a year or two, but in my opinion this one didn’t.

The smell didn’t give anything away about how the beer might taste, pumpkin pie spices were abundant just like I expected. But upon first taste things weren’t so good. The carbonation was extremely low, not entirely flat but close to it. This lack of carbonation caused the beer to feel extremely thick, syrupy and cloyingly sweet. It seemed more boozy than I remember it, which could be another effect of the low carbonation, but I would have expected the alcohol flavors to mellow with age, not increase.

I’m hoping this was just a bad bottle, maybe it didn’t get properly carbonated or sealed? I’ll certainly be looking for a 2011 bottle to try the beer fresh again as it was one of my favorite pumpkin beers from last year.

There are some people out there that might like this beer, but I’m not one of them. If you’re a fun of pumpkin beers it’s worth a shot. I on the other hand will be out looking for a bottle of the 2011 edition.

My quest for pumpkin beers hasn’t been going too well. I tasted Shipyard Brewing Co.’s Smashed Pumpkin two weeks ago with plans to sample many more pumpkin beers this fall. I’ve found that many pumpkin beers are only sold in six packs (or four packs in some cases) and I’m just not a big enough fan to buy that many at a time. But the search goes on and I’m hoping to get a few more in before Thanksgiving.

I recently stopped by Manzanita Brewing Co. in Santee to try their Pumpkin Ale and wasn’t disappointed. Headbrewer and Co-Founder Garry Pittman poured me a sample and I enjoyed it so much a took home a growler full.

Manzanita Brewing Co.’s Pumpkin Ale is more of an Imperial Pumpkin Ale at 9.5% ABV but it’s very easy drinking and hides it’s alcohol well. No fresh pumpkins are used to make the beer, but canned pumpkin pie mix which does include actual pumpkin is added to the boil along with ginger, nutmeg and cinnamon (the pumpkin pie mix used includes all of those spices as well as cloves and allspice).

I picked up cloves and nutmeg while smelling the beer, it has a strong aroma of typical pumpkin pie spices. The taste is very much spices as well. There is a bit of sweetness from the malt and maybe a bit of ginger (I’m not sure if the pumpkin pie mix includes any additional sugar). I couldn’t taste any hops, Manzanita uses a small amount of Fuggles but the hops don’t play a big role in this beer (they don’t calculate the IBU as it’s not really important). There is a slight hint of alcohol, but it doesn’t come across as being as strong as it actually is. In addition to the spices and Fuggles hops, Maris Otter is the base grain and an English ale yeast finishes out the ingredient list.

Pittman tells me that there has been quite a demand for Pumpkin Ale. The first keg tapped in the tasting room was sold out within 7 hours between tasters, pints and growler fills. They have sold out of their first batch at the tasting room in Santee, but they’re fermenting another batch now and are hoping to keep it available until Thanksgiving. Kegs have been gone out to some bars and restaurants but I didn’t get a list of which specific locations have Pumpkin Ale.