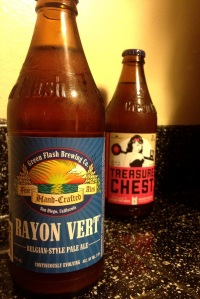 I picked up this bottle of Rayon Vert, a recently (re-) released Belgian-Style Pale Ale from Green Flash with low expectations. Green Flash released a small amount of a beer called Treasure Chest in June of this year, which was a test run of sorts for Rayon Vert, Brewmaster Chuck Silva told me there were some minor recipe changes but they’re pretty similar.

Unfortunately I didn’t like Treasure Chest too much. Everytime I opened a bottle I smelled and tasted band-aids. This was most likely a result of the Brettanomyces used to bottle condition the beer. After pouring carefully into a glass (while being careful not to disturb the yeast at the bottom of the bottle) I took a whiff and was immediately reminded of plastic-smelling band-aids.

Upon first cautious sip however I didn’t taste much of the sort, instead I was greeted by fruity (pineapple?) like hops, a toast-like malt character, and a nice dry finish. Rayon Vert is bottle conditioned with Brett, so it will change over time, it’s hard to say if the band-aid like flavor will emerge (though with Treasure Chest it was there even when the beer was fresh). As Green Flash noted in a press release announcing the beer last month,

Because it is bottle conditioned, the beer will continue to change with age and there is no way to foresee what it will taste like after years in the bottle. Silva predicts that the results from this ageing process will be akin to Champagne.  He is convinced that Rayon Vert left to rest in the proper conditions will only improve over time.

Rayon Vert is a solid beer when fresh, hopefully it ages gracefully.