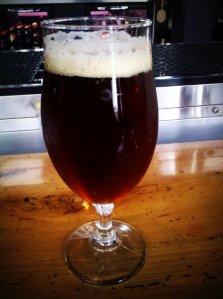 I usually make it a point to have a couple good beers every weekend, but for some reason this weekend seemed to  be all about beer. Maybe it was the rain on Saturday, what else is there to do when it rains? Regardless of the reason, I drank some great beer this weekend.

Friday night I had dinner at KNB Wine Cellars and somehow managed to only have one beer. Their tap list is so good it was hard to decide on what to drink but I had Vrienden, the slightly sour and a little sweet (thanks to hibiscus flowers) New Belgium/Allagash collaboration. This wasn’t the first time I had Vrienden and I’m still undecided on it. The first time I had it out of a bottle I thought it was good but not great. I had it on draft about a month ago and really enjoyed it. This time it seemed sweeter than I remember, the fruity hibiscus flowers were very apparent. A good beer but I didn’t like it as much as I remembered.

Saturday I started the day off watching the SDSU/BYU game and opened my last bottle of Deschutes 2009 The Abyss. It’s been reported that many of The Abyss bottles from 2009 were infected and had off smells and flavors which was the case with this bottle. (The last bottle I opened before this one was last summer and the off smell/flavor wasn’t nearly as prominent.) There was a strong Brett smell and some off flavors, it wasn’t terrible but didn’t taste right. I’ve heard some people say they really like these infected bottles, and others say they can’t stomach it at all and have to pour it out. I was able to drink about half the bottle but am glad I don’t have any more of these bottles sitting around.

A bit later in the day I went to The Linkery for their 6th anniversary where they had some nice beers on tap. I started off with Ballast Point’s San Salvador Saison, which now is about five or six months old. I had a small taster of San Salvador at the Ballast Point 14th Anniversary Festival when it was fresh and it was one of my favorite beers of the day. If memory serves me it has changed a bit, but it still a great beer. It has a much stronger yeast characteristic that gives it a bit of a sweet flavor up front. There is still plenty of spice in there but the yeast is what stands out. I also had Black Market’s Rye IPA on cask dry hopped with Cascade and Amarillo hops. This was only my second time having this GABF gold medal winning beer, plenty of citrus hops and a nice mouthfeel from the cask.

Later that night I ended up at Counterpoint where they had a keg of Lost Abbey’s Red Poppy on. This is one of my favorite sours but sadly it’s pretty rare. I heard they weren’t doing too many kegs of it this year, so far I’ve seen it at Eleven, Ritual Tavern and now Counterpoint. If you see this on tap I highly suggest it. Bottles have started showing up at some of the better liquor stores in town, but they surely won’t last long. I also tried a Victory Golden Monkey, a strong Belgian-style golden ale, it was slightly sweet and fruity and had some serious alcohol heat to the first few sips but was overall a good beer.

Sunday I had to go for a bike ride to burn off all these beer calories, but that ride took me right past Pizza Port Ocean Beach where I stopped in for a few beers. Jolly Pumpkin’s Madrugada Obscura is a nice slightly tart and sour but still good and roasted stout. If only this is what the infected 2009 The Abyss had tasted like. I haven’t seen this on draft before, but I know some bottles showed up recently at some local liquor stores, I highly recommend it. It’s sour, but not too sour, so give it a chance if you like stouts and are on the fence about sours. And being a Pizza Port, I just had to try Nickel Bag, the double IPA brewed with help from O’Brien’s Pub’s Tom Nickel. This was so smooth and easy to drink (for being 10% ABV) it could be dangerous. There are a ton of hops in there, but it’s not overpoweringly bitter, it has some citrus and pine flavors from the hops and a nice malt backbone to balance things out.

And for the final beer of the weekend I cracked open a 2011 Stone Belgo Old Guardian Barleywine while watching the Oscar’s. I would have loved to do a side-by-side comparision for the Belgo and the regular, but wasn’t able to do that last night (I’m sure I’ll get another opportunity in the future). I really enjoyed the Belgo OG. The Belgian yeast made it fairly sweet, but not in an overpowering or cloying and syrupy kind of way, which took a lot of the alcohol heat off. At about $6/22oz this is a solid beer. I can’t wait to try it along side the original OG and probably put some of both versions away to age for a while.