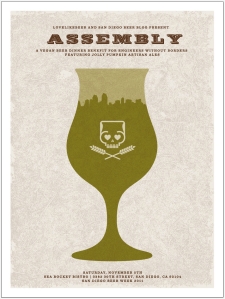 I’ve been busy lately which means blogging here hasn’t been happening as much as usual, but thankfully things seem to be slowing down for the next week or so leading into San Diego Beer Week. Look for an event round up, and a hopefully updated event calendar next week before SDBW gets underway.

And speaking of SDBW, I’ve teamed up with LoveLikeBeer to host an all vegan Jolly Pumpkin beer dinner at Sea Rocket Bistro. Chef Chad White is working on some amazing pairings for the four Jolly Pumpkin beers that will be featured that night.

Tickets are being sold in advance for the four course prix-fixe meal and it is expected to sell out. Last time I checked a couple days ago there were only a handful of tickets left, so if you’re interested in attending don’t wait to buy your tickets.

It’s not often you get to try four Jolly Pumpkin beers on draft side by side and from the ideas I’ve been hearing Chef Chad toss around the food menu should be spectacular as well.

In addition to the food and beer, limited edition prints (with Jolly Pumpkin beer mixed in with the ink!) will be available. They were created by local artist Josh Higgins who recently got appointed creative director for the Obama 2012 Presidential Campaign.

A portion of the proceeds will go to the local chapter of Engineers without Borders as well.

Click here for more info and be sure to buy a ticket soon if you plan on coming.

As a vegetarian beer dinners don’t often hold much sway for me. Sure, pairing awesome beer with some of the best chefs in town is great, but when you can’t eat half the food on the menu there’s no point in going. I don’t think I’m the only vegetarian/vegan that feels left out when it comes to beer dinners, Stone Brewing Co.’s Master Pairings Vegan Beer Dinner happening tonight sold out well in advance.

Thankfully for us vegetarians there’s a new group in town, LOVELIKEBEER, with a focus on vegan food and craft beer. They’re putting on their first vegan beer dinner at Sea Rocket Bistro this Thursday (May 12, 6-10pm) and the beer list, along with the food each beer is paired with looks fantastic. Each pairing is $10 for the food and 6oz beer, which means you can have a full five course meal or you can just have a few of the pairings. While all of the food and beers sound good,  I can’t wait to try the cask of Ruination IPA dry hopped with Citra hops.

If you’re not a vegan or vegetarian, don’t let the lack of meat scare you away. Check out the menu below including beer pairings.

END_OF_DOCUMENT_TOKEN_TO_BE_REPLACED

The Great American Beer Festival is set to get under way in Denver tomorrow (September 16th). Beer geeks and industry folks from around the world travel to Denver for the event, including many from San Diego. But fret not if you’re stuck in San Diego this weekend with no travel plans for Denver, because even though the biggest beer event in the country is going on a few states away, there are still plenty of great beer to be drank right here in San Diego.