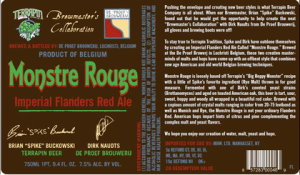 Here in San Diego we’re surrounded by a number of world class breweries and because of our great beer culture plenty of amazing beers from elsewhere in the country and the world are distributed here. But there are some breweries that for one reason or another don’t distribute here. Many great East Coast breweries aren’t available out here in California, off the top of my head I would list 3 Floyds, Bell’s, Founder’s and Terrapin (although there are plenty more those are just the first few that come to mind).

But this weekend we’ll get a small taste of one of those breweries. Terrapin Beer Co. is the latest American brewery to send a brewer over to Belgium to brew with De Proef for their Brewmaster’s Collaboration series. The result is Monstre Rouge, billed as an Imperial Flanders Red. I haven’t seen any bottles of it yet on liquor store shelves (but that doesn’t mean it isn’t here or isn’t coming, I’m not sure about bottle distribution) but The Linkery will be tapping a keg this Sunday at 11:30am.

Reviews on beer blogs are all over the place for Monstre Rouge, I haven’t read a bad review, but many people are saying it isn’t what they expected. At 7.5% ABV Monstre Rouge is on the lower end of the “Imperial” spectrum, but should be quite drinkable. I’ve heard it’s fairly hoppy and has a bit of sour funk (that’s a good thing) from the Brettanomyces. It’s surely going to be an interesting beer that I’m looking forward to trying.