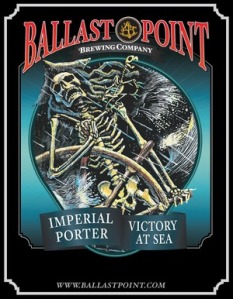 The most recent release of Ballast Point’s Victory at Sea (an Imperial Porter with coffee and vanilla) is my favorite batch yet. It’s a big beer, 10% ABV, but it’s dangerously easy to drink. Past years releases of Victory at Sea have always been good, but there’s something about this one that’s just great. Ballast Point uses cold brewed coffee from Caffe Calabria in North Park and the roasty coffee seems to come through much more than I remember it previously.

The vanilla is still present, and comes through mid sip along with some chocolate like flavors. There isn’t much hop bitterness, far more coffee roastiness, and the alcohol is there but pretty well hidden. Like I said it’s dangerously easy to drink.

Coffee flavor in beer can fade rather quickly. But big dark beers like this can age wonderfully. I highly recommend picking up a few bottles and drinking some fresh and aging some if that’s your thing. And be on the look out for Bourbon Barrel-aged version of Victory at Sea on draft popping up around town (especially at Ballast Point’s two locations) every once in a while.

Typically Victory at Sea is released once per year and usually sells out pretty quickly. I picked up a few 22oz bottles at Bottlecraft for $7.75 each (which I’m pretty sure was cheaper than buying at the brewery). Worth every penny.