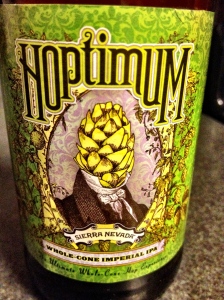 Sierra Nevada’s Hoptimum doesn’t seem to get as much attention as some other seasonal beers that beer geeks go crazy over. Maybe it’s the fact that four packs of Hoptimum can be found pretty much anywhere that sells decent beer, and at a relatively reasonable (for a seasonal Double IPA) price of $10 for said four pack.

As the name implies, Hoptimum is hoppy, 100 IBU’s of whole cone hop goodness including some new Sierra Nevada proprietary hops as well a Simcoe, Citra, Chinook and German Magnum.

Just like you’d expect, it’s bitter, but it also has a great grapefruit and fruity hop flavor. Like many Double IPAs, Hoptimum is fairly sweet, but has the hop bitterness and flavor to balance those sweet malts out.

Hoptimum won’t be on shelves for long, so pick some up soon (and if you do manage to find a bottle a few months from now it’s best to avoid it, all the hoppy goodness will have probably faded).