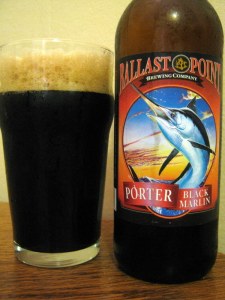 Until recently I can’t remember that last time I had Ballast Point’s Black Marlin Porter. I know I’ve had it in the past, it’s been around a long time and it’s around quite a bit it’s available year round and never too hard to find. Which means I’ve often overlooked it in favor of beers that might not be around the next time I’m at the bottleshop or pub. (I think I’ve mentioned this before, but one of my intentions with the San Diego Brewed column is to highlight some of the great beers being brewed here in San Diego that don’t get talked about much, maybe because they’re fairly ubiquitous.) To further highlight this point I know I’ve had Bourbon Barrel Aged Black Marlin, Black Marlin with Chocolate and Chipotle, and I think Black Marlin with Cocoa Nibs in the not too distant past, but it’s been a while since I had a pint of the regular Black Marlin Porter.

With that in mind I picked up a 22oz bomber at Bottlecraft for around four bucks ($3.99 if I remember right). In the beer geek world that’s a great price, not many beers I buy are that cheap. The bottle doesn’t list it, but Ballast Point’s website shows that Black Marlin is 6% ABV and 45 IBU. Black Marlin is pretty easy drinking despite it’s dark (sometimes intimidating) color.

The smell is roasty with more coming through in the taste. Roasted coffee flavors are an obvious comparison (probably due to roasted malts). There’s a light sweetness as well that’s a bit reminiscent of semi-sweet chocolate. The bitterness is more similar to coffee than hops until the very end when a long, pleasant hop bitter finish and aftertaste come along. One of my complaints about many porters is that they often feel thin (maybe due to the expectation that such a dark beer will be heavier) but that isn’t the case here, Black Marlin isn’t heavy but certainly isn’t thin and watery.

A solid beer at a great price.